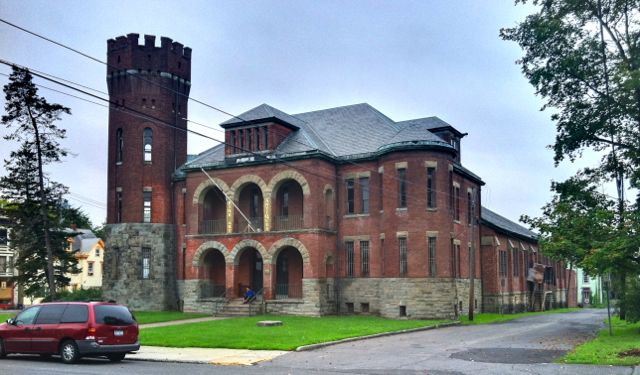 Following an initial discussion yesterday afternoon with Galvan principals T. Eric Galloway and Henry van Ameringen, Hudson Area Library President Theresa Parsons and Vice President Mark Orton have agreed to bring Galvan’s proposal to consider the Armory Building at 51 North Fifth Street as a long-term location for the Hudson Area Library to the full board at their meeting on September 14.   What is being proposed will go a long way towards providing the citizens of Hudson and Greenport with a library they can be proud of.


The board will be asked to consider a scenario that would include a long-term (30 year) lease of a portion of the Armory space for a monthly rent of $1.  The library would be responsible for developing the programmatic requirements for the space and Galvan would be responsible for technical implementation of the design.  The facility would meet current space, handicap accessibility, and environmental standards.  Assuming an agreement in principle by the board at its meeting next week, further steps will be taken to define the library’s requirements.  Input will be solicited from the community, staff, volunteers and library patrons.  If the board decides to proceed with the Galvan proposal for space in the Armory, it is estimated that it will be approximately one year before the new space will be ready.   Until the move, the library will remain as a tenant at 400 State Street.

Before this recent turn of events, the library was able only to consider an interim location following its departure from 400 State Street.  Preceding and following the announcement last month of the sale of its building at 400 State Street, a search was undertaken to locate an appropriate and financially feasible interim site.  The only location found which met all the library’s criteria was 217 Warren Street, prompting the library to approach owner Nick Haddad and open discussions with him regarding a five year lease.  These discussions have been suspended in order to address the offer of Galvan Partners.    Mr. Haddad was informed of this last evening and as a longtime supporter of the library and its mission was understandably enthusiastic about a possible long term arrangement to benefit the community.

The regular monthly meetings of the Board of Trustees are held the second Wednesday of each month at 5:15 at the library and are open to the public.