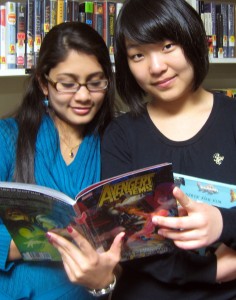 Seventeen new teen graphic novels have just been added to the permanent collection, thanks to the Friends of the Hudson Area Library. Already on the shelves, the new purchases include a variety of graphic novels, both new releases and other popular award-winning titles from recent years. Several of the titles were featured on the 2012 Great Graphic Novels list from the Young Adult Library Services Association, a division of the American Libraries Association. The titles include work from Eisner Award winning authors, including Brian Michael Bendis, Brian K. Vaughan, Robert Kirkman and Derek Kirk Kim. A few series titles were also purchased including Runaways, Naruto and the new Avengers Academy series.

Once thought only for kids who were considered “reluctant readers”, graphic novels are actually for everyone. The format merges literacy and visual literacy by requiring that readers make the connection between the written words and images, while also reading between the panels. This encourages a new kind of literacy, vital in interacting with and succeeding in our multimedia world.

The new books are: Daybreak by Brian Ralph; Takio #1 by Brian Michael Bendis; One Soul by Ray Fawkes; Same Difference by Derek Kirk Kim; Thor the Mighty Avenger by Roger Langridge; Runaways #1, #2, and #3 by Brian K. Vaughan; The Walking Dead by Robert Kirkman; Infinite Kung Fu by Kagan McLeod; Avengers Academy #1 and #2 by Christos Gage; Scarlet by Brian Michael Bendis; I Kill Giants by Joe Kelly; and Naruto #1, #2, and #3 by Masashi Kishimoto.

All titles will be in the Young Adult section at the Library and can be borrowed for up to 21 days with a library card from any library in the Mid-Hudson Library System. They may also be ordered via the online catalog.

Friends of the Hudson Area Library is a nonprofit, 501(c)3 nonprofit organization and all proceeds from its fundraising go to the Library for the acquisition of books and other media and for the development and delivery of the Library’s services to the community.