The Hudson Area Library announced today a $100,000 pledge from the Hudson River Bank & Trust Co. Foundation for its capital campaign to re-purpose the Armory building as a 21st century library.

“We couldn’t be more pleased by this very generous gift, which will bring us to nearly $550,000 in gifts and pledges received to date toward our $2 million goal,” said Theresa Parsons, the capital campaign co-chair with David Murphy, who added, “We are heartened by this leadership gift, as we are relying on the community to help us create the world class library that it deserves.” 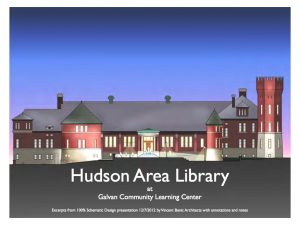 Mark Orton, President of the Board of Trustees, said, “Over 300 people from all walks of life attended our Open House in the Armory in June and another hundred business leaders toured the Armory in August. The community is interested in and excited by the new library, and this pledge from Hudson River Bank & Trust Co. Foundation is another important show of support for this transformative project.”

Carl Florio, Director of the Hudson River Bank & Trust Co. Foundation said, “The Foundation sees the value in this ambitious undertaking, to create a library that will function as an intellectual, cultural and community center for both permanent and part-time residents of Hudson, Greenport and Stockport, and indeed the entire county. We want this to be a space where our evolving community comes together.”

The new library will include much-needed classroom space and a 1,200 square foot community room for public meetings, readings and performances, and for the first time, the library will be ADA accessible. The much larger, 12,000  foot space and open floor plan provide the library with the flexibility to adapt to new technologies and ways of learning and communicating, allowing the it to evolve in the same space over time. The design also includes an exterior plaza for reading, relaxing, programming and outdoor book sales.

For more on the HAL Capital Campaign please visit the new campaign website.

As a joint project, the Galvan Foundation is committed to the complete renovation of the Armory. The Library needs to raise an additional $1.4 million for the furniture, fixtures and equipment to bring the new space to life as a library. Additional funds are sought to enlarge the collections, hire new staff and build endowment for the future.Construction is set to begin in the winter of 2014 with occupancy in winter of 2015.