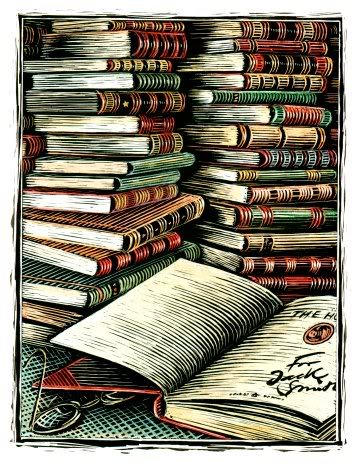 The Friends of the Hudson Area Library is pleased to announce that its recent Adopt-A-Book Matching Grant campaign resulted in the addition of forty new titles to the Library’s collection. Twenty books, newly adopted by patrons, were matched by the Friends with twenty additional titles. This new selection of adopted books include historical fiction, literary fiction, non-fiction, mystery/suspense, humor, horror, short stories, biography/memoir and young adult fiction. Thank you to all of the generous patrons who participated in this special program!

Twenty additional titles were purchased by the Friends and added to the literary classics collection for the Library. All new books are currently on shelves at the Hudson Area Library and may be borrowed for up to 21 days with a Mid-Hudson Library card, or by request online at www.hudsonarealibrary.org. The Adopt-A-Book program gives patrons the opportunity to support the Library’s collection development throughout the year.

Detective Agency by Alexander McCall Smith and Snowblind by Christopher Golden, a horror story were also adopted. A new short story, Starting Over by Elizabeth Spencer and four new biography/memoirs were added as well. They include The Heir Apparent: A Life of Edward VII, The Playboy Prince by Jane Ridley; Beethoven: The Man Revealed by John Suchet; Elizabeth of York: A Tudor Queen and Her World by Alison Weir and This is the Story of a Happy Marriage by Ann Patchett. Two new classics titles were also adopted, The Age of Innocence by Edith Wharton and Treasure Island by Robert Louis Stevenson.

The Friends purchased twenty classic book titles, always popular choices. They include Black Boy by Richard Wright; Legs by William Kennedy; Joy in the Morning by P.G. Wodehouse; Cannery Row by John Steinbeck; Breakfast of Champions by Kurt Vonnegut; The Three Musketeers by Alexandre Dumas; White Noise by Don DeLillo; Peter Pan by J.M. Barrie; The Odyssey of Homer by Homer; Flowers for Algernon by Daniel Keyes; Something Wicked This Way Comes and A Medicine for Melancholy and Other Stories by Ray Bradbury. Also included in this collection are: The Dream of a Common Language: Poems 1974-1977 by Adrienne Rich; The Mysterious Affairs at Styles by Agatha Christie; Wuthering Heights by Emily Bronte; The Portable Dorothy Parker by Dorothy Parker; The Best Short Stories of O. Henry by O. Henry; Portrait of the Artist as a Young Man by James Joyce; Murder on the Orient Express: A Hercule Poirot Mystery by Agatha Christie; and A Tree Grows in Brooklyn by Betty Smith.

The Friends of the Hudson Area Library is an advocacy and support group dedicated to the increasing public awareness, literacy, and services of the Library. For more information about the Friends, including membership and volunteer opportunities, contact the library at 518.828.1792 or visit us on Facebook and Like us.