In 1831, the reviews for pianist and composer Frederic Chopin were pretty good.

And there were plenty more where those came from.  Chopin had the ability, previously unexplored, to combine the folk music of his native Poland with the classical sounds he admired from Bach, Mozart and Schubert. The results were innovations in style, musical form and harmony – a blending that seemed particularly apt for the blossoming romantic period in Europe. 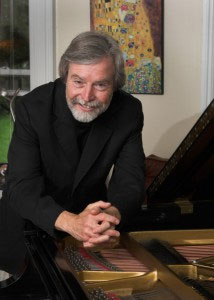 On Saturday, March 22nd, beginning at 6 pm, pianist, instructor and composer Morey Hall will be performing the music of Chopin at the first of a series of fund-raising events on behalf of the Capital Campaign for the Hudson Area Library.

“Chopin was emotional and expressive,” says Hall.  “His work speaks to me in a personal way that is inspiring.  I’m hopeful that the pieces I’ve selected will move the audience, too.”

The Greenport resident, who grew up in North Greenbush, began playing the piano at the age of 5.  “But I didn’t really commit to it seriously until I was a teenager,” he says.  What happened then?  He saw the piano virtuoso Van Cliburn at SPAC and was hooked.  “He was playing Rachmaninoff and my seat was in the third row,” he says with a smile.  “I was moved by the music, but also by his performance.”

So much so, that the teenager headed back stage in search of an autograph.  Hall’s third row seat got him to the performer ahead of anyone else.  But unfortunately, he’d forgotten to bring anything to write with.  “In a stroke of real serendipity,” the pianist explained, “the conductor James Levine was nearby (just beginning his career).  He volunteered to help out.”  The winner of Moscow’s Tchaikovsky Piano Competition signed Hall’s program and with the stroke of a pen, sealed his career path.

The piano concert, being performed at the Hudson Opera House, will include Chopin’s Nocturne in B-flat minor and a group of 4 Etudes, with additional works from Rachmaninoff, Brahms, Debussy and Beethoven.  Chopin’s contemporary, Franz Liszt will also be represented.

“All the musical pieces were influenced by the Romantic Movement,” says Michael Albin, owner of Hudson Wine Merchants.  “So the wines we will be pouring and telling concert-goers about will be paired to match.”  Four examples of light, sparkling and somewhat ethereal wines will be served during the concert intermission.

In keeping with the Library theme, Mr. Hall has selected two books (available at the Hudson Area Library) that should be of interest to concert goers.  The first is Chopin’s Funeral by Benita Eisler.  This book details the featured composer in exile, his explosive love affair and final days in the arms of George Sand’s daughter.   And Beethoven’s Hair – by Russell Martin, a modern day DNA analysis of hair strands collected in 1827 that lead to a conclusion about the cause of the composer’s deafness.

The evening is a benefit to help convert the Fifth Street Armory into the new quarters for the Hudson Area Library.  With groundbreaking scheduled for this spring, the need for the Library’s Capital Campaign to raise the balance of the 2 million dollars required is sure to become more visible.  An overview of the Library’s new quarters as well as donor information can be found at http://armory.hudsonarealibrary.org/.

The concert begins at 6pm on the evening of Saturday, March 22nd at the Hudson Opera House, 327 Warren Street, Hudson.  Tickets for this fund raiser are $75.00 each.  Sponsor tickets include a listing in the event program and are $150.00 each. All donations are tax deductible.   Purchases must be made in advance by check or credit card.  There will be no sales at the door and seating is limited.  Tickets are available by contacting Cayla Consaga at the Library. 518.828.1792 or e-mail cconsaga@hudsonarealibrary.org.  Purchases must be made by Monday, March 17th.

The Capital Campaign of the Hudson Area Library is supported in part by gifts and pledges from Hudson River Bank & Trust Foundation, T. Backer Fund, The Alexander and Marjorie Hoover Foundation, Raymond C. Kennedy Foundation, Inc. and many generous individuals and corporate sponsors.