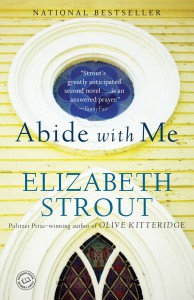 In the late 1950s, in the small town of West Annett, Maine, a minister struggles to regain his calling, his family, and his happiness in the wake of profound loss. At the same time, the community he has served so charismatically must come to terms with its own strengths and failings—faith and hypocrisy, loyalty and abandonment—when a dark secret is revealed.

Tyler Caskey has come to love West Annett, “just up the road” from where he was born. The short, brilliant summers and the sharp, piercing winters fill him with awe—as does his congregation, full of good people who seek his guidance and listen earnestly as he preaches. But after suffering a terrible loss, Tyler finds it hard to return to himself as he once was. He hasn’t had The Feeling—that God is all around him, in the beauty of the world—for quite some time. He struggles to find the right words in his sermons and in his conversations with those facing crises of their own, and to bring his five-year-old daughter, Katherine, out of the silence she has observed in the wake of the family’s tragedy.

A congregation that had once been patient and kind during Tyler’s grief now questions his leadership and propriety. In the kitchens, classrooms, offices, and stores of the village, anger and gossip have started to swirl. And in Tyler’s darkest hour, a startling discovery will test his congregation’ s humanity—and his own will to endure the kinds of trials that sooner or later test us all.