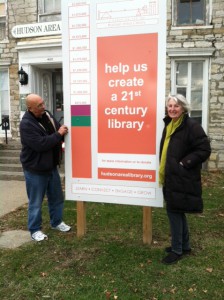 As 2014 came to a close, the total on our Campaign thermometer was increased by almost $200,000! At $850,000, we’re almost halfway to our three-year goal of $2 million. The campaign’s end-of-year report itemized gifts and pledges from individuals, businesses, foundations, a grant from New York State and proceeds from fundraisers.

The year also saw the beginning of construction at the new site. How exciting it has been to witness the transformation within the Armory’s walls, as well as the progress on the outside! A recent construction milestone was the provision of an access ramp leading to the newly defined main entrance on Fifth Street. When the Armory is completely transformed, we’ll be in a wonderful new space – twice the size of our current facility. Right now there are great opportunities for contributors to help in the creation of our 21st century library. No longer a place just for books, we’re creating a center for learning, a digital lab and a community center. Make a donation to the Campaign for the Hudson Area Library and add your support!