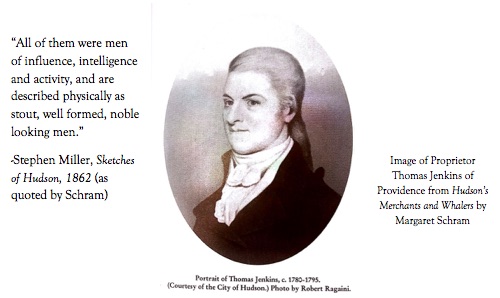 The Hudson Area Library History Room, as part of its Local History Speaker Series, is pleased to present The Proprietors and their Lasting Influence on the City of Hudson by Carl G. Whitbeck, Jr. on Thursday, January 26 at 6:00 pm.

Mr. Whitbeck, a local resident whose family has deep roots in the area, will offer a fascinating presentation on the Proprietors, the founders of Hudson, NY. They were a group of Quaker merchants from Nantucket Island and Providence, Rhode Island who sought to find a fertile land in which to establish a commercial settlement. In 1783, Thomas Jenkins purchased a bit of land on the Hudson River called “Claverack Landing” from the Dutch settlers. In 1784, Jenkins and his committee mapped out an early survey of streets and plots. The other proprietors soon followed with their families and established the City of Hudson in April of 1785 as an incorporated city. A question and answer period will follow, accompanied by light refreshments.


Mr. Whitbeck is a partner at Rapport Meyers LLP in Hudson, NY, where his work covers a variety of areas: municipal and public authorities law, real estate and land use, environmental law, employment law, and commercial law and economic development, among others. Currently the Athens town attorney in Greene County, he acted as corporation counsel to the City of Hudson from 1980 to 1999 and as town attorney for the Town of Greenport from 1986 to 1995. His civic involvement includes serving on a number of community boards, including the Hudson Home for the Aged. He represents many nonprofit clients in connection with their operations and projects.  He has represented the NYS Association for Retarded Citizens, Columbia County Chapter (COARC) since 1974, and he represents the Rudolph Steiner Foundation and Camphill Village. He has served on the Board of Directors of the Berkshire Taconic Foundation since 2013. A Hudson native, Mr. Whitbeck received his B.A. from Williams College and his J.D. from Albany Law School of Union University.

This presentation will be in the community room on the first floor of the Hudson Area Library, with wheelchair access. Admission is free and open to the public. Seating is available on a first–come, first-served basis.