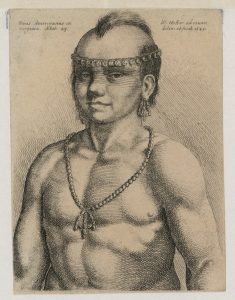 The Jacob Leisler Institute, in cooperation with Hudson Area Library and the Gotham Center for New York History, will present Natives on the Land: American Indians in the Mid-Hudson Valley by Dr. William A. Starna on Thursday, April 19 at 6pm at the library.

William Starna is Professor Emeritus of Anthropology at the State University of New York, Oneonta. He is a long-time student of the Iroquoian and Algonquian peoples of eastern North America, in addition to federal and state Indian relations. He has received several fellowships including from the National Endowment for the Humanities, a Senior Fellowship at the Nelson A. Rockefeller Institute of Government, and a New York State Library Research Residency. Dr. Starna is a Fellow of the New York Academy of History and a member of the board of trustees, The Jacob Leisler Institute for the Study of Early New York History. For many years Starna was a consultant with the Native American Rights Fund and has worked with over twenty American Indian tribes on land claims, treaty rights, and the federal acknowledgement process. He has written many books and articles on Native American and colonial history.

A question and answer period and refreshments will follow the talk. For more information email programs@hudsonarealibrary.org, call 518.828.1792 x101, or visit the main desk in the library.

The Institute contains a collection of original, digital, and/or paper copies of primary source manuscripts, books, maps, and illustrative materials, as well as a library of secondary resources that provide scholarly context to the primary sources. The Jacob Leisler Institute is an open resource for both scholars and the interested public.

The Gotham Center is a university-based research and educational center, devoted to advancing scholarly and public understanding of New York City’s rich and living past. The organization was founded in 2000 by Mike Wallace, Distinguished Professor of History at John Jay College and The Graduate Center, CUNY, after his landmark work Gotham: A History of New York City to 1898, co-authored with Edwin Burrows, won the Pulitzer. For nearly twenty years, it has been the one academic institution devoted exclusively to promoting this critical field of study.