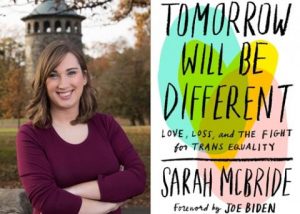 Program Description: Join us, The Link Project, and OutHudson as we collaborate to bring you a special book reading and signing of Tomorrow Will Be Different by Sarah McBride. McBride is an author, LGBTQ Rights activist and the Grand Marshal for this year’s OutHudson Pride Parade.

Tomorrow Will Be Different is the memoir of author and LGBTQ rights activist Sarah McBride. McBride is the National Press Secretary of the Human Rights Campaign, and is largely credited with the passage of legislation in Delaware banning discrimination on the basis of gender identity in employment, housing, insurance, and public accommodations. She has been a speaker at the Democratic National Convention, becoming the first openly transgender person to address a major party convention in American history.

Informative, heartbreaking, and empowering, Tomorrow Will Be Different is a love story and a call-to-arms that shines a light on personal stories within the trans community, and demonstrates why the fight for equality and freedom has only just begun.

Sarah McBride is the Grand Marshal for this year’s OutHudson’s LGBTQ pride parade also on June 16, kicking off at 2pm on Warren Street.