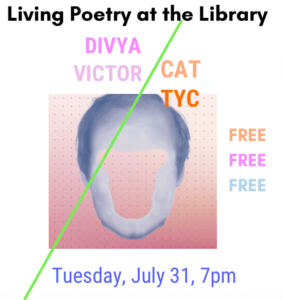 Program Description: This ​event represents an ongoing collaboration between Fence, a ​locally produced, ​nationally renowned literary ​press, and the Home ​School, an annual poetry conference that takes place ​in Hudson ​every summer and which brings more than 60 poets to meet, study, read, and write. ​This collaboration puts visiting poets and the Home School community in touch with our local community of readers and writers at the library.​

Divya Victor is the author of Kith (Fence, 2017); Natural Subjects (Trembling Pillow Press, 2015), winner of the Bob Kaufman Award; Things To Do With Your Mouth (Les Figues, 2014); Partial Derivative of the Unnameable (Troll Thread, 2005); and Goodbye John! On John Baldessari (2012); and the chapbooks UNSUB (2014), Hellocasts by Charles Reznikoff by Divya Victor by Vanessa Place (2011), and SUTURES (2009). Her poetry, poetics, and criticism have appeared in Dusie, Journal of Commonwealth & Postcolonial Studies, Crux, and P-QUEUE, among others, and her poetry has been translated into French and Czech. She has been a Mark Diamond Research Fellow at the US Holocaust Memorial Museum, a riverrun Fellow at the Archive for New Poetry at University of California San Diego, and a writer-in-residence at the Los Angeles Contemporary Exhibit (LACE). Her work has been performed and installed for or at Museum of Contemporary Art (MoCA) Los Angeles, the National Gallery of Singapore, LACE, and the Museum of Modern Art (MoMA). She earned a PhD from the State University of New York at Buffalo and is an assistant professor of Poetry and Writing at Michigan State University.

Cat Tyc is a writer and artist. Her video work has screened locally and internationally at spaces that include the Microscope Gallery, Anthology Film Archives, CUNY Graduate Center, Brooklyn Museum, Kassel Fest and the PDX International Festival. She has directed music videos that have been added to the rotation on LOGO’s NewNowNext as well as MTVu. In 2006, she was awarded a Flaherty Seminar Fellowship in “Creative Demolition: Reconstructing Culture through Innovations in Film & Video” at Vassar College. Some of her videos have been anthologized in the “Journal of Short Film” series distributed by Ohio State University. Her most recent writings have been published in Weekday, The Sink Review and 6×6 and she has contributed to BOMB and Topical Cream. She teaches writing throughout New York City within the CUNY system and works as the Program Coordinator for The Home School based in Hudson, NY.

Fence is a locally produced, nationally distributed and recognized literary press which recently won the prestigious Whiting Magazine Award. Since 1998, Fence publishes a literary periodical in print twice a year and round-the-clock on the internet at fenceportal.org, as well as Fence Books.

This event is free and open to the public. It will take place in the community room, which is wheelchair accessible. For more information email programs@hudsonarealibrary.org, call 518.828.1792 x101, or visit the main desk in the library.