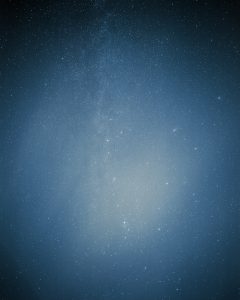 work which contains images of the moon, sun and sky made over several years with an 8×10 camera.  Following the talk will be a star-watching party led by the Amateur Telescope Makers of Boston. This event will take place at the Churchtown Dairy, in their beautiful interior as well as on the grounds.

Registration: Suggested. Email programs@hudsonarealibrary.org, call 518.828.1792 x101, or visit the main desk in the library.This program is being done in collaboration with the Claverack Free Library.

Signed copies of the book will be available for sale. Refreshments will be served.

The Heavens contains images of the moon, sun and sky made over several years with an 8×10 camera. The star images are hour-long exposures with the camera mounted on a clock drive. The sun and moon images are made with a telescope attached to her camera. Speaking of her inspiration for these images, Bosworth writes: “Every clear night of the summer my father would go out for a walk to look at the night sky. Many nights I would join him. We knew the North Star, and the Big Bear, but the rest became our own. At times we stood still for an hour or more to watch for shooting stars. We had no agenda. It was all about amazement at a sky full of stars. With this sense of wonder, I began making photographs of the Heavens. In these days of the Hubble Telescope and its spectacular imagery from deep space, I wanted a reminder of the mystery of our own night sky.” The book also includes facsimile editions of three artist’s books that Bosworth has made as a nod to Galileo’s 17th-century publications in which he first observed the skies through a telescope.

Barbara Bosworth’s publications include The Meadow, Natural Histories, Trees: National Champions, and Chasing the Light. In 2016, The Meadow was nominated for the Aperture-Paris Photo Book of the Year prize. Bosworth’s work has been exhibited in several one-person shows at museums throughout the United States. A recipient of multiple fellowships and grants, Bosworth’s awards include a Guggenheim Fellowship, a Pollock-Krasner Foundation Grant, and a Kittredge Foundation Grant. Her work is represented in major collections including Boston Museum of Fine Arts, Museum of Modern Art, Princeton Art Museum, San Francisco Museum of Modern Art, and Smithsonian American Art Museum. Bosworth lives in Massachusetts. She is professor of photography at Massachusetts College of Art and Design in Boston.

Churchtown Dairy is a working Biodynamic farm that intends to serve as a beacon for those working to promote sustainable agriculture and regenerative communities. Built under the direction of Abby Rockefeller from her vision and passion to bring beauty to farming the dairy supports the development of just and resilient food systems while raising public awareness of the positive impacts ecological agriculture can have on the health of the human being and the earth. They strive to imbue all their work with beauty — the buildings, the gardens, the care for the animals, and the economic and social systems within which they work.