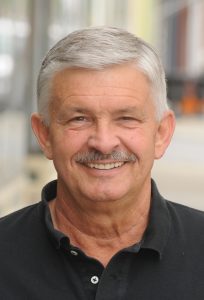 Program Description: The latest in the Local History Speaker Series – Local News to Local History: Hudson Neighbors with Lance Wheeler – features videographer, newsman, and local resident Lance Wheeler. Mr. Wheeler has been recording news in our local area since the 1960s and this local history talk will be a retrospective of his over 40 year career covering local news.

Come hear his most memorable news stories from the Hudson, Greenport, and Stockport areas. A question and answer period and refreshments follow the talk.

Mr. Wheeler began his media career as a paperboy for the Register Star and hanging around WHUC as a teenager. His dad, former Hudson Mayor, Samuel T. Wheeler, introduced him to local journalists and provided him with a unique insight into politics and the press. He later served as the WHUC News Director after graduating from Ithaca College. As a National Guardsman, his duties included public information responsibilities for the Hudson and Leeds Engineer and Infantry Companies. He was a classroom teacher for over thirty years at Hudson City School District, and in that capacity, pioneered media-related student curriculum. Mr. Wheeler then created and served as president of The Creative Team, a full service advertising, public relations and marketing company. He represented NYS Senate, Assembly, Gubernatorial and Supreme Court candidates. Other clients included Ski Windham, the Columbia County Fair, Taconic Bioscience, and Hunter Mountain Festivals.

Lance Wheeler pioneered local TV access programing with the longest running educational program in New York State: “Inside The Hudson City School District”. This program provided positive stories about the Hudson schools on five cable systems in the Hudson Valley and Capital District and was awarded numerous awards and recognition for its innovative and groundbreaking programming. NewsCenter 6‘s first “Hudson Valley Bureau” was established by Mr. Wheeler. This direct “microwave” link to the CBS6 station continues to provide feature and late breaking stories for WRGB. “Neighbors with Lance Wheeler”, a local magazine TV show, is viewed by more than 20,000 homes over the Mid-Hudson Cablevision system. Lance’s coverage of breaking news, sports and and feature stories can be seen on CBS, Fox, ABC, NBC, and international cable networks such as CNN, ESPN, The Weather Channel and BBC. His still images of news events have appeared in in Columbia-Greene Media Newspapers, Albany Times Union, Kingston Freeman, Mid-Hudson News, and Associated Press.

Mr. Wheeler is married to Gail Gleason Wheeler and has two children, Morganne and Cameron and a three-year-old grandson, Caelen.