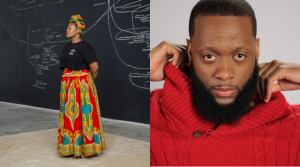 Program Description: Living Poetry at the Library with poets Mahogany L. Browne and Jive Poetic is an evening of poetry, prose, and performance. A discussion and reception follows the reading, allowing audience members to share their reactions, and to interact with the poets and each other.

Suggested Audience: Free and Open to All!

Living Poetry at the Library is an annual literary event that celebrates and introduces diverse literary artists to community members presenting different literary traditions to the community as an opportunity for cultural exchange and growth. This year’s program is part of the library’s inaugural Curator In Residence program with Mahogany L. Browne, in celebration of the library’s 60th Anniversary.

Mahogany L. Browne is a writer, organizer, and educator. Interim Executive Director of Urban Word NYC and Poetry Coordinator at St. Francis College. Browne has received fellowships from Agnes Gund, Air Serenbe, Cave Canem, Poets House, Mellon Research, and Rauschenberg. She is the author of Woke: A Young Poets Call to Justice, Woke Baby, Black Girl Magic, Kissing Caskets, and Dear Twitter. She is also the founder of Woke Baby Book Fair (a nationwide diversity literature campaign) and as an Arts for Justice grantee, is completing her first book of essays on mass incarceration investigating its impact on women and children. She resides in Brooklyn, NY.

Jive Poetic is a writer, organizer, and educator based in Brooklyn, New York. He received his BA in Media Studies from the State University of New York at Buffalo, and his MFA in Writing from Pratt Institute. In 2017, Jive received the John Morning Award for Art and Service. He is the founder of Insurgent Poets Society, Carnival Slam: Cultural Exchange, and the co-founder of the Brooklyn Poetry Slam. His work has been showcased onTVONE’s Lexus Verses and Flow, PBS NewsHour, and BET. International support for his work has come from the British Arts Council; US Embassies in Australia, Brazil, and Poland; and the Minister Of Culture in Antigua and Barbuda. Currently, Jive is the Nuyorican Poets Café Friday Night Slam curator.