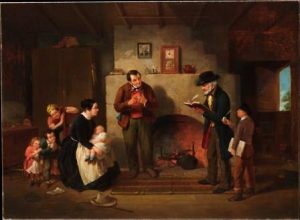 The exhibition was developed in collaboration with the Jacob Leisler Institute for the Study of Early New York History, an independent, not-for-profit study and research center devoted to collecting, preserving, and disseminating information relating to colonial New York under English rule. In the years spanning 1664 to 1773, New York province’s diverse European settlements and Native American and African populations fused into a cosmopolitan colonial territory with ties throughout the Atlantic World. The Institute is unique in focusing on this under examined 109-year period in American history.

The History Room hours are Tuesdays 4 – 6pm and Saturdays 10am – 12pm, during which people visit and browse the extensive collection of city directories, yearbooks and local history books; and research items in the archival collection. The public can also request information on local history that volunteers will research. Appointments are available upon request. For more information email reference@hudsonarealibrary.org, call 518-828-1792 x100, or visit the main desk in the library.