You know you’ve arrived when your autograph is sold on E-Bay!

Columbus Day Weekend
Sunday, October 9 at 6pm at the Library
Tickets are $35.00 each
BUY THEM HERE. 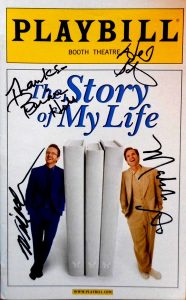 Composer Neil Bartram and writer Brian Hill joined “scribbles” with the co-stars of their Drama Desk nominated Broadway musical, The Story of My Life.

An idea can come out of the blue – from a line in a book, a comment from a child or a newspaper article. “As long as there is some tug emotionally,” says Broadway show writer Brian Hill, “the kernel of the idea stays with me.” And then, after consulting with his partner, Neil Bartram (coincidentally, a composer and lyricist), Hill starts outlining a story.

“Amazingly,” he says, “often when we’ve completely fleshed out a show, have the performers cast, the costumes, the set, – after everything is done, I’ll go back to that outline and find we’ve used it almost exactly as originally written. There has been very little fiddling with the concept.”

But that doesn’t mean there weren’t hundreds of edits to dialogue. And hundreds of re-workings of songs – composed by Bartram, of course.

And that’s what will drive our show, Making Musicals – A Concert with Conversation.

END_OF_DOCUMENT_TOKEN_TO_BE_REPLACED

On Saturday, March 22nd, pianist and composer Morey Hall will be performing the music of Chopin at a fund-raising event on behalf of the Capital Campaign for the Library.

“Chopin was emotional and expressive,” says Hall.  “His work speaks to me in a personal way that is inspiring.  I’m hopeful that the pieces I’ve selected will move the audience, too.”  Chopin had the ability to combine the folk music of his native Poland with the classical sounds he admired from Bach, Mozart and Schubert.  The results were innovations in style, musical form and harmony – a blending that seemed particularly apt for the blossoming Romantic Period in Europe. In 1831, reviewers of his compositions wrote, “Hats off, gentlemen! A genius.”

During intermission, attendees will be served four examples of light, sparkling and somewhat ethereal wines specially selected by Michael Albin, owner of Hudson Wine Merchants.   “All the musical pieces on the program were influenced by the Romantic Movement,” Albin explained.  “So the wines we will be pouring and telling concert-goers about will be paired to match.”

The program will include Chopin’s Nocturne in B-flat Minor and a grouping of four Chopin Etudes. Additional compositions from Rachmaninoff, Brahms, Debussy and Beethoven, as well as Chopin’s contemporary, Franz Liszt, will also be presented.

Described as “an evening of wine and music”, the concert begins at 6pm at the Hudson Opera House.  Tickets for this fundraiser are $75.00 each.  Sponsor tickets include a listing in the event program and are $150.00 each.  All donations are tax deductible.  Purchases must be made in advance by check or credit card.  There will be no sales at the door and seating is limited.  For tickets, contact Cayla Consaga at the Library – 518.828.1792 or by e-mail cconsaga@hudsonarealibrary.org.  Purchases must be made by Monday, March 17th.

Learn more about the event here.