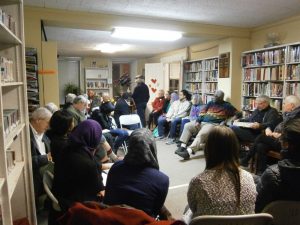 More than 40 people attended “Civil Rights – Show and Tell” last Thursday evening. With participants of every race and culture – as well as every age bracket, it was a crowd representative of the broad diversity in the Hudson community. Besides tales told by several former activists in attendance, there was a 2-minute video by the acclaimed Civil Rights photographer James H. Peppler of Greene County. Unable to attend, he sent a composite “memory” of the 1960s uprisings including images of Dr. King, Robert Kennedy, the Selma march, Ralph Abernathy and others.

Included in the group were several young High School students. Many noted that they had never put a “face” to the individuals who had participated. After hearing stories from several who were involved in moving the Civil Rights movement forward, one student thanked those who had been involved.

Many thanks to Dan Udell, who graciously recorded the event for us and has made it available for viewing online.

The evening was held in advance of a performance scheduled for next Saturday, February 13 at 3pm. Turning 15 on the Road to Freedom is a one-woman show recounting the struggles of 14-year-old Lynda Blackmon while she participated in the civil rights march from Selma to Montgomery, Alabama. The event takes place at M.C. Smith Intermediary School, 102 Harry Howard Avenue. Suggested donation for tickets is $10.00 for adults. Children are admitted free. There are no advance reservations. Proceeds will benefit the library.