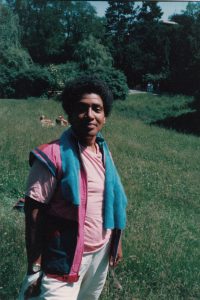 In preparation for the upcoming Humanities NY reading and discussion series, Silence Will Not Protect You!: The Writing of Audre Lorde (see below), the library will be screening the new documentary “Audre Lorde – The Berlin Years 1984 to 1992” by filmmaker Dagmar Schultz on Monday, March 12 at 6pm.

American poet, librarian, and civil rights activist Audre Lorde resided in Berlin, Germany during a critical personal and political time. This documentary chronicles an untold chapter of Lorde’s life: her empowerment of Afro-German women, as she challenged white women to acknowledge the significance of their white privilege and to deal with difference in constructive ways. Lorde’s influence on the German political and cultural scene was during a decade that brought about the fall of the Berlin Wall and the reunification of East and West Germany.