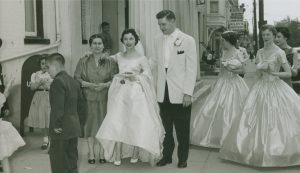 Join us for the Local History Speaker series presentation “The General Worth Hotel: Hudson’s Second Grand Home” by Gary Sheffer on Thursday, March 22 at 6pm.

Many long-time Hudsonians remember the dying days of The General Worth Hotel at 215 Warren Street: the collapsing ceilings, the rotted windows, and the omnipresent pigeons. The glorious life of this once-grand hotel came to an end in 1969, when it was razed after it was deemed a public health and safety hazard — despite the fact that it had been listed on the National Register of Historic Places. For more than 100 years, this urban Greek Revival hotel was the cultural and hospitality center of Hudson, with waiters and waitresses speeding across a black-and-white tile floor to serve dinner to patrons, wedding celebrants, and the regulars. Named after Hudson’s most famous resident, General William Jenkins Worth (as in Fort Worth, Texas), the hotel was built in 1836-37 when Hudson was a bustling port city. Writer Henry James allegedly arrived for dinner in 1905, “with two ladies and a French poodle.” Told the dog was not welcome, he dined elsewhere.