Many Friends donations are being added to the Hudson collection this month, including adult and young adult DVDs and audio books. The DVD titles include Hannah Arendt, a portrayal of the famous philosopher and political theorist, Crystal Fairy, a coming of age story about three brothers in search of a highly hallucinogenic cactus, and The World’s End, in which five childhood friends undertake an epic pub crawl in search of the fabled pub “The World’s End.”

For the audio book lovers out there, several fiction and non-fiction titles have been added as well. The non-fiction titles include Twelve Years a Slave, a memoir of a black man who was kidnapped and sold into slavery for 12 years, I Am Malala, the tale of the youngest nominee ever for the Nobel Peace Prize, and Still Foolin’ ‘Em, the humorous biography of comedian Billy Crystal. The fiction titles include The Minor Adjustment Beauty Salon, the latest installment in the No. 1 Ladies Detective Agency Series, Bridget Jones: Mad About the Boy, in which Bridget Jones is back and contemplating the trials of middle age, The Circle, a tale from the best-selling author and finalist for the National Book Award, Dave Eggers, The Cuckoo’s Calling, a mystery written by J.K. Rowling under the nom de plume Robert Galbraith, and Doctor Sleep, the much anticipated sequel to the horror classic The Shining. The Library will also be adding two popular young adult titles with films coming out this year, Divergent, the first in a dystopian trilogy, and The Book Thief, a tale of Nazi Germany and the sustaining power of hope cultivated by reading books. 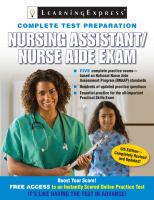 The Friends also recently purchased nine new reference books and study guides for high school, college, and continuing education students. Four of the new circulating books are specific to college students studying for a nursing career, including registered, practical, and vocational nursing, as well as nurse’s assistant, and nurse’s aide. The five additional titles include SAT 2014, Premier TABE Study Guide, and three reference books: Getting Financial Aid, Peterson’s How to Get Money for College 2014, and The Fiske Guide to College.

Many thanks to the Friends for their generous contributions!

No matter what tests you need to prepare for, there is a website to help you do it!

And don’t forget about the Testing and Education Reference Center that is available through the Reference page of the Hudson Area Library website. You can find practice tests and review for these exams, as well as many other exams, on this site. All you need is a library card to log in!